Using a cube to represents softwares or software components is a quite common idea. The NEXTSTEP (and later, OPENSTEP) logo was in fact a pile of cubes; this representation emphasis the idea of software reusability. 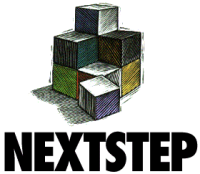 The usage of a cube in the "NeXT" world is quite popular too, because of the NeXT logo, and, of course, the first NeXT computer, the very famous NeXT Cube -- a revolutionary computer.

So using a cube-like logo seems interesting to me. I then had the idea of using a framed cube, because it keeps the idea of a "backbone" software -- which is what our desktop will be for the desktop applications, providing frameworks and common behavior, and what it will be for the user, as it could be seen as the "backbone" of the interaction with the computer. And I liked the simplicity of this small logo... even if I think it would deserves to be drawn with more precision.

It also reminds me a bit of the cube in a comics from François Schuiten and Benoît Peeters, "La Fièvre d'Urbicande" in "Les Citées Obscures". It's the story of a strange cube/structure which grows...